Concerts for a Cause

In celebration of our 20th Anniversary Season, we are throwing the doors wide open and inviting all to attend our concerts for free! We’re celebrating with a little something for everyone from fresh Michigan bands to the 500-year-old Vienna Boys Choir, from legendary Detroit artist Alvin Waddles to our own Scott Wilkinson with his newly composed Broadway-bound musical. To top it off, we’re giving thanks for 20 outstanding years by giving back…we’re taking a donation at the door and giving away the proceeds to some of Birmingham First’s local missions!

You may also donate online. Please enter your donation as “other” and designate your contributions as “Live at First.”  Click here to donate today.

We are grateful to our Friends of Live@First for making this possible.  If you’d like to become a Friend, please contact the music office.

Donate to Live At First Today!

a showcase by
SCOTT WILKINSON

Based on the life of Dietrich Bonhoeffer, this new musical tells the story of one man’s epic journey to overcome the forces of evil in the name of good.

Read more about Bonhoeffer, The Musical and Listen to Sample Songs 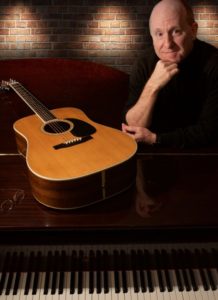 Scott Wilkinson is an experienced singer and songwriter. He was educated in both science and music and received his Bachelor’s Degree from Albion College. He also has a Masters in Songwriting from The Berklee College of Music in Boston. He has spent much of his songwriting career as a performer, recording seven CDs and performing throughout the Midwest. He also attended medical school and is a practicing physician and surgeon.

“The Bonhoeffer project has been a wonderful journey for me. Several years ago, I was somewhat restless artistically. To me, this is a sign that something needs to change and you need to elevate your game. So I decided to go back to school to become a better composer, songwriter, and lyricist. When I was attending classes at the Berklee College of Music, one of my professors pulled me aside and said that I should write musical theater. I had never considered such a thing. At the time, my wife, Jill, was reading an epic biography on the life of Dietrich Bonhoeffer, and she was taken in by the dramatic nature of the story. So I read the biography and wrote one song, more or less to ‘get it out of my system.’ With the help of Dale Grisa, who recorded and produced this song, and Corey Roberts, who sang it beautifully, we were all convinced it was a project worth pursuing. Several more songs were written and on a lark, I entered Broadway producer Ken Davenport’s competition for up and coming Broadway composers. Much to my surprise, I was selected for showcasing some of this work at his theater in New York City. Since that time, Ken has taken me under his wing to help me develop not only this show but also my skills as a composer-lyricist. It has been a period of enormous growth for me and I will be forever grateful to Ken for his time and energy invested in me.

I am also very grateful to Richard Lewis for all of his work on this project. He has logged an inordinate number of hours researching, translating and bringing together many sources to tell the story of Bonhoeffer. His commitment to his writing in the wee hours of the morning has always been an inspiration to me.

Lastly, I am grateful for the life of Dietrich Bonhoeffer. We live in perplexing and cynical times. To maintain our perspective and sanity we must find heroes that transcend the confines of different historical times, cultures, socioeconomic strata and political labels. Bonhoeffer jumps out of every box. He cannot be neatly pigeonholed as a liberal or a conservative; a spy or a traitor; a pastor or a rebel. However, there is no dispute about the enormous intellect and human character he courageously demonstrated in both his writings and actions while living in and through one of the darkest chapters of human history. His seventeen volumes of writings are a treasure trove of timeless, original theological ideas, philosophical thought and human wisdom. The most profound personal benefit I have experienced with this project is that I feel as if I have spent many hours with him through his writings, others’ writings about him and his story. One cannot spend that kind of time with Dietrich Bonhoeffer and not be significantly changed for the good.”

The second I found out what kind of edifice Scott was planning, I knew I wanted to get in on the ground floor of it. A couple of years later, my enthusiasm for the project hasn’t diminished one bit. Indeed, it can even be said to have increased a hundredfold, a thousandfold. The more time I spend with Dietrich Bonhoeffer, the more I realize what an incredibly caring and astute man he was. Add to this his bravery, and a picture of one of the greatest figures of the twentieth century begins to emerge – a picture I hope “Bonhoeffer the Musical” will go a long way to convey to as wide an audience as possible.

Read more about Bonhoeffer, The Musical and Listen to Sample Songs

Julia Knitel is a New York-based actor who has been performing both on & off Broadway, as well as regionally, for the past 10 years. Most notably, Julia starred as Carole King in the First National Tour of Broadway’s Beautiful The Carole King Musical (and appeared in that role at The Fisher). Other credits include Broadway: Beautiful: The Carole King Musical, Bye Bye Birdie. Off-Broadway: A Letter to Harvey Milk (Lucille Lortel nomination for Best Leading Actress). New York/Regional: Louise in Gypsy (The Muny – St Louis Theatre Circle nomination), Martha in The Constant Wife (Denver Center), Jennifer/Theresa in the World Premiere Red Maple (Capital Rep), Nora in Brighton Beach Memoirs (Portland Stage), Ingrid in Volleygirls (NYMF). Film: Miles.. She can be seen this June as Ulla in The Producers at Casa Mañana Theatre in Texas.