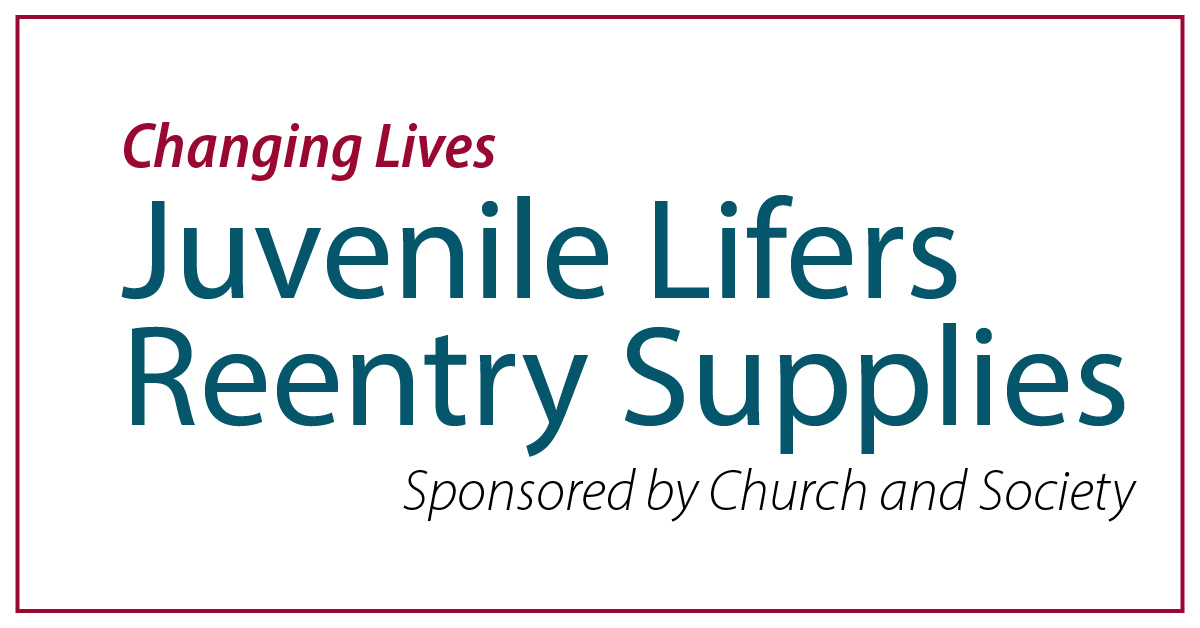 The article below appeared in today’s Detroit Free Press. It is a story of Juvenile Lifers who give back to their community after their release. Both of the juvenile lifers featured in the article touched our lives and we touched theirs. Birmingham First Church and Society volunteers fill a backpack for a specific lifer with clothes and shoes of specific sizes, which are presented to the juvenile lifer on the day of release. Both Demetrius (released Oct. 2, 2018) and Kyle (released Sept. 27, 2018) received a reentry backpack from Birmingham First. It is inspiring to see these two men reaching out to others as they fashion their new lives. God’s saving grace is at work within Demetrius and Kyle. Thank you for helping us change lives.

For more information on how you can donate to the Juvenile Life project or volunteer to shop for reentry backpack supplies, contact the church office.

He was convicted, jailed for murder. Now freed Detroit man has new mission.

The way Demetrius Knuckles sees it, he helped destroy his community.

He was just 12 years old when he started dealing crack cocaine in his neighborhood near the old Michigan State Fairgrounds in Detroit.

It was 1985, and crack was infiltrating cities across America. Like many of the adults in his life, Knuckles sold drugs and carried guns while the grip of addiction befell people all around him: pregnant women, police officers, a prominent ophthalmologist. Even his 13-year-old friend smoked crack.

Knuckles cycled in and out of juvenile detention until age 17, when he was implicated in the slaying of a nightclub security guard. He was convicted of first-degree murder and sentenced to mandatory life in prison without parole.

But Knuckles, now 46, was granted a second chance. He walked out of prison a free man last October thanks to a 2016 U.S. Supreme Court decision. The court in 2012 struck down mandatory life sentences for juveniles convicted of murder. Four years later, the Supreme Court ruled that its earlier decision applied retroactively, opening a door for inmates like Knuckles to be resentenced.

Now he’s trying to repair the damage he inflicted some 30 years ago.

Demetrius Knuckles, 46, of Roseville helps Belinda Dickerson, 64, of Inkster push her cart to her car after picking out food donated by Gleaners Community Food Bank of Southeastern Michigan at Community First Tax Service in Inkster on Saturday, Aug. 10, 2019. After being released from prison in 2018, Knuckles has rededicated his life to building up the community. (Photo: Kimberly P. Mitchell, Detroit Free Press)
“I put time and effort into corrupting neighborhoods, poisoning the neighborhoods, destroying neighborhoods. I did that for many years growing up,” he said. “I’m going to spend my time rebuilding what I once destroyed.”

Knuckles provides food to people in  metro Detroit every weekend through several grassroots efforts he calls “feeding the forgotten.” He gives away fresh produce and home-cooked meals and sometimes joins forces with other former juvenile lifers who, like him, feel called to give back.

‘Owed a debt to society’

Knuckles lives in Roseville, but his weekends begin in the parking lot of a tax business in Inkster. Every Saturday morning, a tractor-trailer delivers hulking boxes of produce and meat donated from Gleaners Community Food Bank.

Knuckles is among about 10 volunteers who turn the parking lot into a free grocery store, setting up folding tables topped with enough food for 250 people.

On a sunny afternoon in August, a line curved around the building as locals waited to pick from items such as bright red peppers, watermelon and russet potatoes.

Knuckles helped load grocery bags into people’s cars, his forearms displaying large tattoos of the words “freedom” and “loyalty.” He got the tattoos after his re-sentencing as a reminder that if he’s loyal to his freedom, “there’s no returning to prison.”

It was behind bars that Knuckles met James “JaMo” Thomas, a former juvenile lifer released in 2017 who’s instrumental in the food giveaways in Inkster.

The 2012 Supreme Court decision instilled hope in a lot of juvenile lifers, Knuckles said. He mapped his future with the belief that he’d be released one day. Behind bars, he and Thomas joined charitable projects, raising money for children with cancer and making quilts and pillows for survivors of domestic violence. He and Thomas talked about how they would serve the community after prison.

After Thomas returned home, he noticed people going hungry as he drove along Eight Mile Road and visited homeless shelters. He began organizing regular food donation events through his ministry, Melanic Islamic Palace of the Rising Sun, with help from other local groups. His network of volunteers includes Knuckles and several other formerly incarcerated men.

“We understood that we were blessed and fortunate to come out from under the natural life sentence that we had,” said Thomas, 47, of Inkster. “We owed a debt to society.” 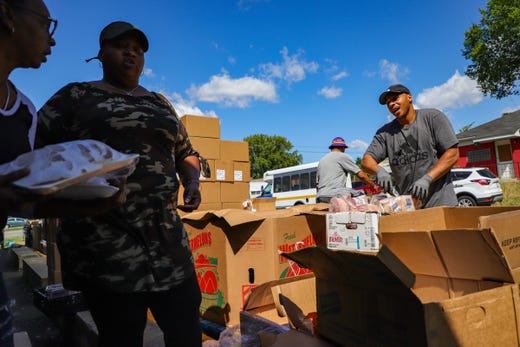 Knuckles was convicted in the 1990 fatal shooting of a security guard at a Detroit nightclub. It’s a crime he maintains he did not commit. Yet, he doesn’t shy from talking about his prior offenses, bad decisions during a childhood of neglect and dysfunction. Knuckles’ parents battled addiction, he said, and he was exposed at a young age to drugs, firearms and violence.

His past came full circle in prison, where Knuckles was incarcerated alongside young men whose parents had once bought drugs from him.

“Some of them have life in prison or a long prison sentence,” Knuckles said. “So I have to accept responsibility for the part that I played.”

After he resolved to better himself, Knuckles was met by detractors. Some fellow inmates painted a bleak picture of life outside of prison, cautioning him and others anticipating release with warnings like “It ain’t easy out there” and “It’s gonna be hard.” Knuckles tuned it out.

As of Aug. 1, 95 juvenile lifers had been released since the 2016 Supreme Court decision, according to data provided by the Michigan Department of Corrections. A search of their offender records shows that none have returned to state prison.

On Sunday mornings, Knuckles and his cousin Tamica Squirewell cook for 30 people. They start as early as 6 a.m., whipping up meals, like baby back ribs, macaroni and cheese, and green beans. They divvy up the food among Styrofoam boxes lined up on the kitchen table.

Knuckles delivers the meals to a nursing home in Detroit. The residents there languish in their own type of prison, he says, and likely don’t receive frequent visits from family.

“We’re blessed,” a smiling resident told Knuckles on a recent afternoon as she rolled past in a wheelchair, a box of fried chicken and French fries in her lap.

Knuckles donates leftover groceries from the Inkster events to members of Mt. Ararat Baptist Church, just north of Hamtramck, where his cousin is the pastor. The small brick church stands among vacant lots in a neighborhood where Knuckles sold drugs as a teen. There, he recalls witnessing depravity — violent, unspeakable acts carried out against women. He feels some culpability.

“When you infiltrate their mind and poison it to the point to where they become so addicted that they’ll do anything, you become responsible,” he said of dealing drugs. “I look back at that type of stuff, and that’s what really propels me.”

Knuckles is proud of himself for living “the right way” these days. He rents a home with his girlfriend and recently started a new job at an automotive plant.

At the food donation event in Inkster on a recent Saturday, Knuckles paused from breaking down cardboard boxes to catch up with Kyle Daniel, a fellow volunteer and former juvenile lifer.

Daniel, 43, of Detroit, counts a number of successes since his release from prison last September: his first-ever car purchase, a construction job, an apprenticeship at Iron Workers Local 25.

Beyond piecing his life together, he feels obligated to help improve the community.

Knuckles smiled and nodded. He knew exactly what Daniel meant.

Angie Jackson covers the challenges of formerly incarcerated citizens as a corps member with Report for America, an initiative of The GroundTruth Project. Click here to support her work. Contact Angie: ajackson@freepress.com; 313-222-1850. Follow her on Twitter: @AngieJackson23